Two Berlin thirty-somethings, Jakob and Isabelle, meet at a party and arrange to see each other again on the evening of September 11, 2001. Despite this ill-fated start to their affair, they soon marry and not long after move to London, where Jakob will take the post of a colleague killed in the World Trade Center attack. But both newlyweds soon find themselves seduced by their respective vices, and their relationship, like the world they once knew and the happiness they once shared, proves more fragile and fragmented with each passing day.

Katharina Hacker writes about love and violence, about destruction and the way global events encroach upon individual lives, about excessive personal liberty and the inability to feel oneself truly free. She has given her readers something of a Bright Lights, Big City for the post-9/11 era. The jury of the German Book Award praised Hacker for having had the courage to confront some of our most pressing issues. “Her protagonists are in their thirties,” wrote the jurors. “They know it all and yet of one thing they know nothing: themselves. They drift and yet are driven . . . Their questions are our questions.” 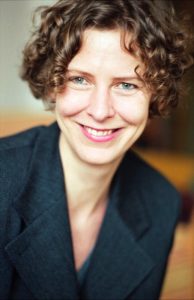 Katharina Hacker, born 1967 in Frankfurt am Main. Hacker studied philosophy, history and Jewish studies at the University of Freiburg and the University of Jerusalem. Since 1996 she has been living as a freelance writer in Berlin.